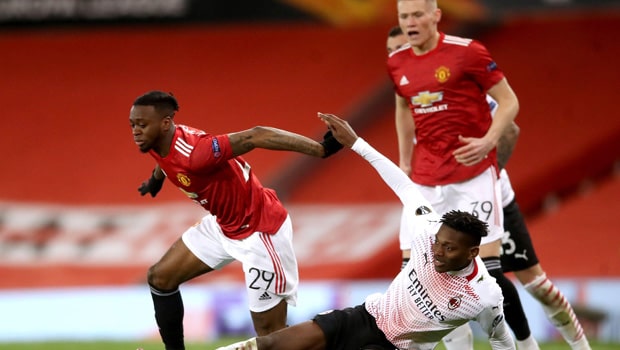 Manchester United was denied a first-leg victory in the UEFA Europa League round of 16 clash with Italian Serie A side AC Milan after Simon Kjaer’s 92nd-minute goal.

The Red Devils took the lead in the 52nd minute of the second half through Amad Diallo who was signed from Seria A side Atalanta.

The Italian side started better of the two sides and they found the back of the net as early as six minutes but Rafael Leao’s goal was disallowed for offside.

AC Milan thought they had taken the legitimate lead in the 11th minutes of the game when Franck Kessie found the back of the net but his goal was overturned by the VAR for handball.

Ole Gunnar Solskjaer’s side then settled into the game properly with Alex Telles getting close from a long-range effort while captain Harry Maguire missed an open goal from a corner.

However, Manchester United took the lead five minutes into the second half with a header.

Manchester United manager Ole Gunnar Solskjaer explained that conceding a late goal was hard and his team was not sharp enough on the backdrop of the Manchester derby win against City at the weekend.

“That equalizer makes it harder but it was always going to be down to the second game. We were too slow with the possession, it is sometimes hard off the back of a game like Manchester City. We were a long way off it today. Amad Diallo is creative, he plays with freedom. Amad had a nice goal, he still has loads to learn and he will be better for that.” Manchester United boss Ole Gunnar Solskjaer said.

Meanwhile, Arsenal took a first-leg advantage against Olympiacos with a 3-1 win.

On-loan Real Madrid midfielder Martin Odegaard gave the Gunners the lead before El Arabi equalized in the second half.

Gabriel and Elneny ensured a win for the Gunners with goals in the 79th and 85th minute with the second leg coming next week Thursday.