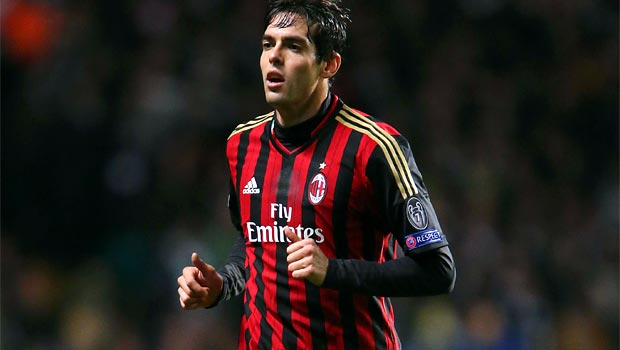 AC Milan midfielder Kaka insists that his side have improved under boss Clarence Seedorf asthey look to upset rivals Juventus in Serie A on Sunday.

The Rossoneri have won back-to-back games in the league in recent weeks and are still in with a chance of progressing in the Champions League after a 1-0 defeat to Atletico Madrid.

Although Milan are out of the title race, Kaka is still hoping to affect Juventus’ grip at the top of the table. Juve, 1.08 to win the Scudetto, are 31 points in front of Seedorf’s side but Kaka insists his side can beat them.

He told Sky Sports Italia: “The game against Juventus is a derby of Italy, an international derby, games that are felt deeply by us as players, by you in the media and by the fans.

“All week you live waiting for this derby. We hope to be able to write another small page in the history of Milan, to say: ‘We played a great match against a great team’.

“For us, the three points are very important for the table but also on an emotional level and for our growth.

“To beat Juve would give us a great boost for the end of the season. This Juventus is very strong, they have great talent and are doing well.”

Milan’s chance of victory may be dampened by the fact that Mario Balotelli is a major injury doubt with a shoulder injury.

The striker trained on his own on Friday and may join Stephan El Shaarawy and goalkeeper Christian Abbiati on the sidelines.