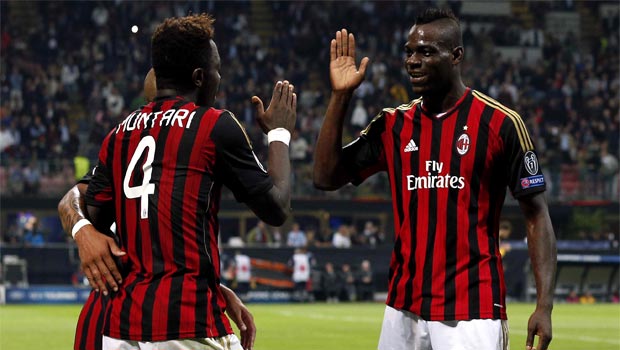 AC Milan could be without Mario Balotelli for Sunday’s clash with Juventus as the striker continues to struggle with a shoulder injury.

The former Manchester City ace picked up the problem in Milan’s 1-0 Champions League defeat to Atletico Madrid – a result that has left the Italian club’s European hopes hanging by a thread.

A return to domestic matters could be viewed as a welcome relief from the pressures of Europe’s elite club competition, but not when the opposition are nine points clear at the top of the table and on course for another Serie A title.

New Milan coach Clarence Seedorf has tried to stabilise the club and make them harder to beat and they have lost only once in six games since the Dutchman took charge.

But they are still struggling for goals, with only eight in the league since he was handed the reins, and the absence of Balotelli will be felt at the weekend.

Contrast that with the Old Lady who have Fernando Llorente with 10 goals and Carlos Tevez with 14 in their ranks and it easy to see why Juve are the 2.10 favourites to win, with Milan on offer at 3.70.

Juventus are unbeaten in their last 17 league games, a streak in which Antonio Conte’s men have won 15 times, but they might be slightly fatigued having played in the Europa League on Thursday.

But their strike duo were rested for that game and will be back in the hunt for goals at the San Siro as the Turin club look to put further daylight between themselves and the chasing pack.

Daniele Bonera returns to Milan’s squad, along with fellow defender Mattia De Sciglio, and he feels they will be able to cope with the Juve frontmen.

“Tevez and Llorente are a good combo, the numbers speak for themselves,” he said. “But we are starting to find a balance and we want to continue our recent run of good results.”

For the hosts, Giampaolo Pazzini could be handed his second successive start after last week’s 2-0 win away to Sampdoria, but may play with a face mask to protect his nose after suffering a facial injury last week.