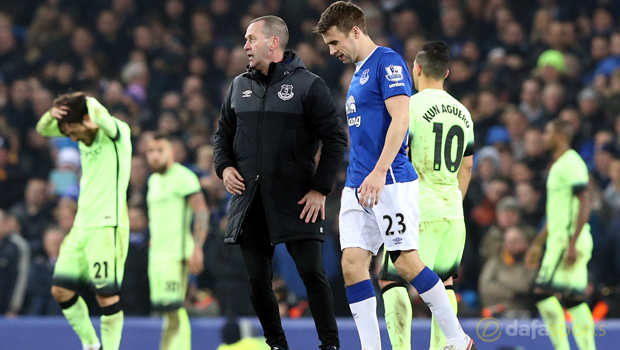 Boss Roberto Martinez fears Everton could be without Seamus Coleman for up to a month after he suffered a calf injury in their 2-1 Capital One Cup, semi-final first-leg win against Manchester City on Wednesday.

The 27-year-old Republic of Ireland international right-back limped off late on at Goodison Park to leave the Toffees down to ten men as Martinez had already used all of his substitutes.

Coleman’s injury came shortly after influential striker Romelu Lukaku also hobbled off after picking up a knock when scoring the hosts’ second goal of the game 12 minutes from time.

Martinez revealed that Lukaku, who made it 12 goals in 12 games in all competitions, hurt his ankle and could miss the FA Cup third round home tie against Dagenham & Redbridge on Saturday, but Coleman is facing a longer lay-off.

He said: “Seamus with his calf is probably the most serious. Those things are between three to four weeks.”

It means Coleman will miss the Dagenham game plus Premier League outings at Manchester City and Chelsea, before a visit of Swansea and the semi-final second-leg at City on January 27.

However he warned that the tie is far from over ahead of the second leg later this month.

He added: “We know we have a momentous, huge second leg and we will have 8,000 Evertonians with us at Etihad Stadium. We wanted to win the first leg and we have done that.

“I am very, very proud of our performance. We conceded a goal to a really good counter attack but showed a winning mentality to come right back. We showed great character.”