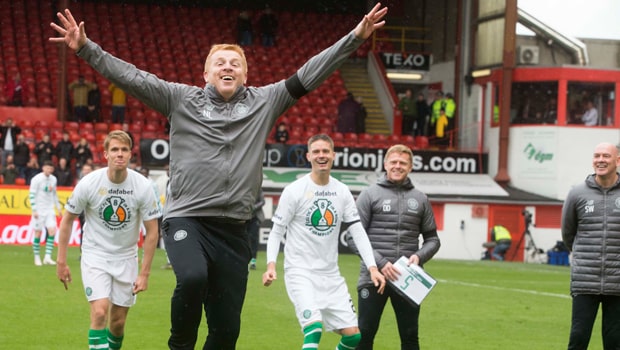 Neil Lennon says this season has been the “toughest piece of management” of his career after he guided Celtic to their eighth straight Scottish Premiership title.

Lennon was thrust into the Celtic hot seat for the second time in February after being appointed on a deal until the end of the season following Brendan Rodgers’ sudden departure to Leicester City.

It has not been plain sailing for the 47-year-old Northern Irishman, who had previously managed the Bhoys from 2010-2014, but Saturday’s 3-0 victory at Aberdeen secured Celtic’s eighth straight league success, and the club’s 50th in total.

Swede Mikael Lustig, Croatian Jozo Simunovic and Frenchman Odsonne Edouard were all on target at Pittodrie Stadium as the Hoops racked up their 26th league victory of the campaign.

Reacting to Celtic’s triumph, Lennon admitted this campaign has been the toughest as a manager. “I’m very proud,” he was quoted as saying by the Sunday Post.

“This is my second spell managing this club, and it is a privilege. I’m so proud of the players, the way they handled the occasion.

“It’s been the toughest piece of management I’ve had in my ten years of management. That’s just with the scrutiny and agitation and the discontent surrounding the club. We had to keep calm.

“I feel you need the hide of a rhinoceros but luckily I’ve got that! We need – even the supporters – to take stock. This is eight titles. This hasn’t been done for a very, very long time.”

It remains unclear whether Lennon will be offered the job permanently beyond this season although Saturday’s title win has done his chances no harm.