Leigh Griffiths thrilled to be back among the goals 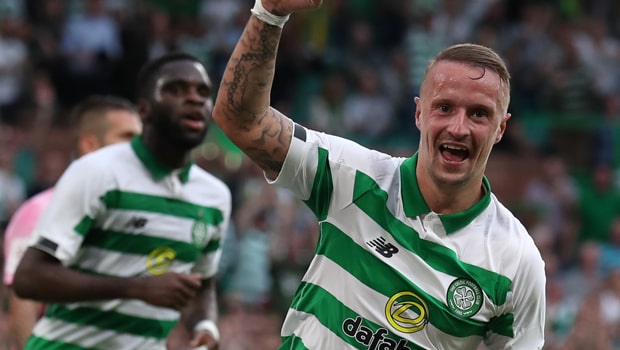 Leigh Griffiths hopes his emotional goal in Celtic’s 5-0 win over Nomme Kalju in this week’s Champions League qualifier can be the catalyst for a big season.

The Hoops striker was finding the net for the first time since a similar effort at Hamilton Accies in November, while it was his first Parkhead goal in 10 months. Griffiths missed the second half of last season as he battled personal issues, with the Scotland international openly admitting he had suffered from depression.

Being back in the Hoops’ first team hasn’t come easy as Griffiths paid tribute to those that have helped him turn things around. “I think you could tell how much I enjoyed it by my reaction,” he said.

“Words can’t actually describe how good a feeling it was when the ball hit the back of the net. “A lot of things went through my mind. So much hard work has been put in, not just by me, but by the backroom staff and everyone connected with myself.

People have worked so hard with me to get me back on the pitch and I can’t score goals without my team. “That was a bit of payback for all that and it’s just the start. That’s me up and running for the season and hopefully there is a lot more to come.”

Boss Neil Lennon, whose side are now almost certain to face either CFR Cluj of Romania or Maccabi Tel-Aviv of Israel in the next round, was delighted to see Griffiths back doing what he does best. “The reception he’s got from the players and supporters since he came back, it makes me very happy and very proud,” said the Celtic manager.

“He has got a huge lift from all of that. He needs to keep a level, he’s still got a bit of work to do in his conditioning. But that will do his confidence the world of good. You could see what it meant to him.”

Celtic are 1.33 to win their ninth consecutive Scottish Premiership title this season, with city rivals Rangers priced at 2.80.