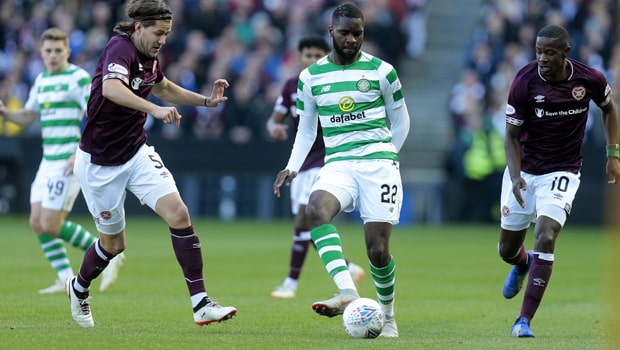 Celtic striker Odsonne Edouard is adamant that RB Leipzig will face a strong challenge from his side when the two teams meet in the Europa League on Thursday night.

The German outfit recorded a 2-0 win when the teams last met at the end of October.

That result left Celtic third in Group B but a win this week could move them level with their German rivals.

Celtic’s only defeat in their last six games came away at the Red Bull Arena and Edouard is expecting a much-improved performance.

He scored a brace during Saturday’s 5-0 success over Hearts and the Frenchman insists his team are full of confidence heading into their latest European challenge.

“I think it will be a totally different game to the match in Germany,” he told reporters.

“It is a home match for us so it is going to be totally different.

“We want to win every match so that will be the same on Thursday evening against Leipzig. We know that this is a really important game for us, so we want to go into it with the best approach and the best mindset.

“There is a good dynamic about the team at the moment and we are in good form. We are always working harder to get better and trying to improve our standards to get the wins.

“For me, I feel good physically right now. The same goes for the whole team, too. I just try to do as well as I can in each match to help the team win.”

Celtic are 3.80 to win this week, with the draw the same price, while RB Leipzig are 1.91 favourites.