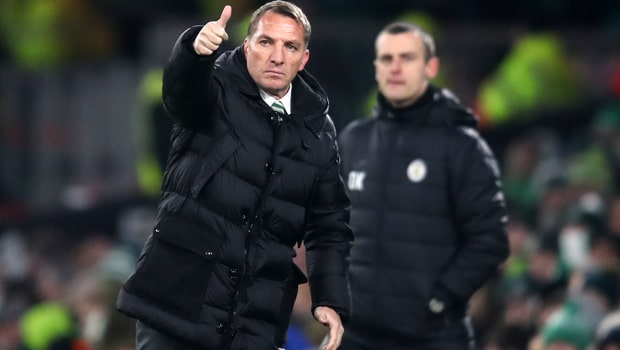 Celtic boss Brendan Rodgers was quick to praise his new players after watching his team cruise past St Mirren on Wednesday night.

The Hoops moved a point clear at the summit of the Scottish Premiership thanks to a 4-0 win over the Buddies, coupled with Kilmarnock beating Rangers at home on the same night.

New man Oliver Burke, who is on loan from West Bromwich Albion, opened the scoring in the 11th minute thanks to a neat header.

He then grabbed another after Scott Sinclair had scored from the spot, before fellow new signing Timothy Weah wrapped up the scoring in the 85th minute.

Both Burke and Weah have impressed Rodgers since they joined the Scottish giants and the ex-Liverpool and Swansea boss has been quick to praise both players.

He told reporters: “It was a very good win for us. I thought that first game back at the weekend was a good performance and the mark of the best teams is going into their next game, albeit midweek, and perform better.

“I really enjoyed watching the game and watching how we played. It was pleasing for Oliver getting his first goal for the club, Timothy coming on, young Ewan Henderson, who I believe is a big talent, he just needs maturation and experience – but you could see with his beautiful pass that allows Timothy to finish. It was really good to watch.

“Oliver is a talent. We’re coaching him and giving him clarity in what he has to do. But his strength and power is phenomenal and his touch is good.

“His job is to create goals and score goals. He assisted at the weekend and he’s got his goals against St Mirren. He’s got many, many great attributes and it’s just about continuing to work with him and finding the relationships with his team-mates.”