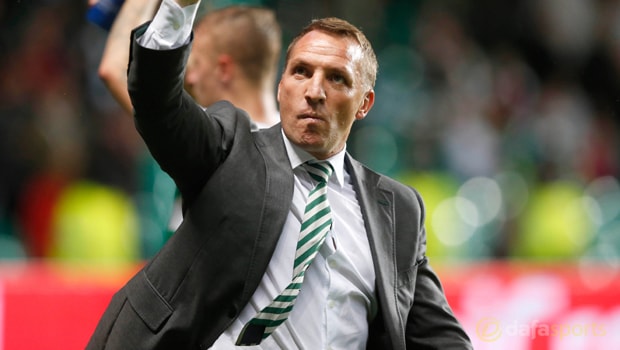 Celtic manager Brendan Rodgers believes his side have matured over the last 12 months as they prepare to face Astana for the second successive season in the Champions League.

The Bhoys are two matches away from securing their place in the Champions League group stage, having already seen off Linfield and Rosenborg in the qualifying rounds.

Celtic claimed a 3-2 aggregate victory over Astana in 2016-17 in the third qualifying round and Rodgers is hoping for a repeat performance Moussa Dembele, who will miss the clash through injury, scored a dramatic stoppage-time penalty to win the tie in the second-leg, while Astana were reduced to nine men as emotions boiled over.

The Scottish champions welcome their Kazakh counterparts to Celtic Park on Wednesday for what is likely to be another heated affair but Rodgers feels they are a more mature squad and will be able to put their name in the hat for the group stage.

Rodgers said: “The players have built up is this ability to handle pressure and an ability, emotionally, how to deal with the big games.

“I can remember at this stage last season, in the second game with Astana, there was all this emotion around it.

I think it’s to the huge credit of the players how they have come through that. “We’re a more mature group as a result.

“In particular the last game in Rosenborg [the 1-0 third qualifying round, second leg win in Trondheim], there was a lot of pressure and a lot of focus on the boys but they came through it and they stayed calm and composed.”

Celtic can be backed at 1.44 to claim a first-leg triumph, while Astana are priced at 7.00 to pick up an away win and the draw is available at 4.33.