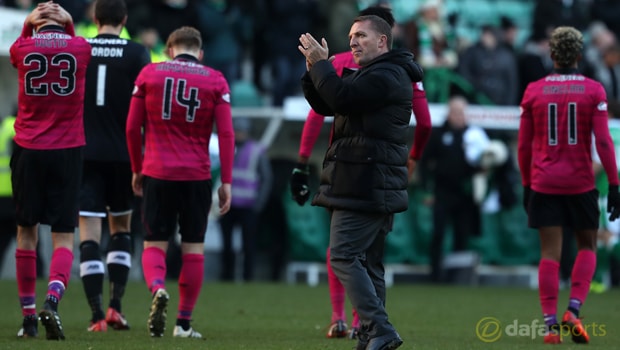 Brendan Rodgers was left disappointed as his Celtic side threw away a two-goal lead to draw 2-2 with Hibernian at Easter Road on Sunday.

The Bhoys had looked on course to secure a routine victory in Edinburgh as a brace from Scott Sinclair moved them into a comfortable lead midway through the second half, but goals from Efe Ambrose and Oliver Shaw helped Hibs grab a point late on.

The hosts even could have snatched a victory in stoppage time, when Shaw’s goalbound effort was blocked by Mikael Lustig, but in the end, the match finished all-square and Celtic were able to extend their unbeaten domestic run to 68 matches.

The Glasgow giants have also moved five points clear at the top of the Scottish Premiership, but Rodgers was left disappointed with the way his side threw away their two-goal lead.

“It’s two points dropped, for sure. We were very good for up to 70-odd minutes of the game, our defending was good and we created chances,” Rodgers told Sky Sports.

“We were 2-0 up and it could have been four or five, and then we stopped passing it. We stopped moving and let them into the game.”

Despite his disappointment at the dropped points, Rodgers conceded it would have been unjust had Hibs completed their comeback by winning the match.

“At 2-0 they had nothing to lose so they had the momentum after the first goal.

At the end they had a chance to score, and if they’d won that game it would have been a crime,” the former Liverpool boss added.

Celtic do not have to wait long for their next league match, as they will play host to Hamilton at Parkhead on Wednesday.

Rodgers’ side are priced at 1.14 to return to winning ways during that contest, while Hamilton are available at 17.00 and the draw is on offer at 8.00.