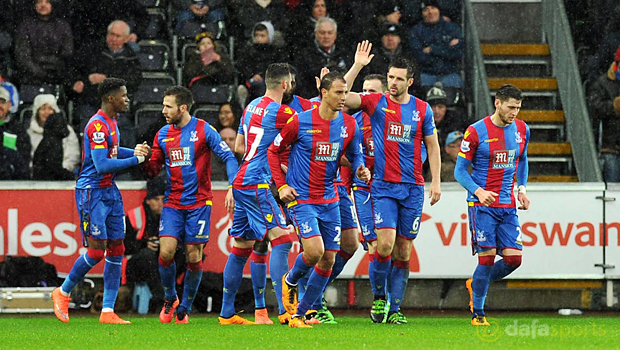 Scott Dann has called for his team-mates to pull together and haul themselves out of a dreadful run of form that has seen the club slip into a relegation battle.

The Eagles enjoyed a brilliant first half of the season and some impressive results saw them in the hunt for a European position.

However, Alan Pardew’s men are in a sticky patch at the moment and are yet to taste victory in the Premier League since the turn of the year.

Six defeats in their last seven league outings has seen them drop to 13th in the table, with just eight points the gap to 18th-place Newcastle United.

Palace have struggled in the attacking department in 2016 and the absence of Yannick Bolasie and Bakary Sako, both who have been out injured, has been the major reason.

Emmanuel Adebayor was signed on a free transfer in January and the former Spurs striker did manage to open his account in the 2-1 loss to Watford last time out.

Pardew is in desperate need of a victory and Dann, who has been a regular fixture in the first team this season, admits they need to get out of their malaise sooner rather than later.

“We were in a good position two months ago, and we’re not in a bad position now but with the run of results we’ve had it doesn’t look great,” he said. “We need to stand up and stick together as a team and try and grind a win out to turn that corner.”

Palace are back in action on Sunday when they travel to Tottenham in the fifth round of the FA Cup and the match could be a good distraction from the league.

The visitors are priced at 6.00 to get the win, a draw is on offer at 3.80 while the hosts are 1.62 favourites to keep their good run of form going.