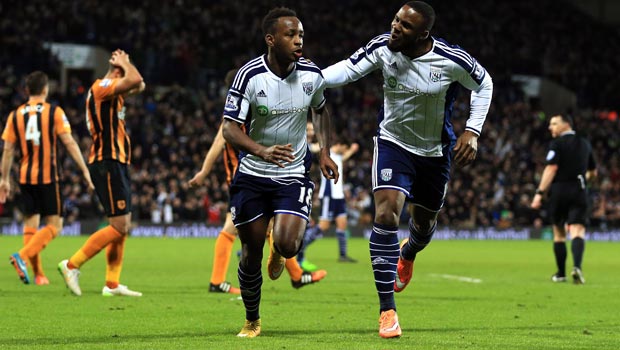 Striker Saido Berahino says he is enjoying life at West Bromwich Albion although he stopped short of committing his future to the Baggies.

The 21-year-old took his tally to five goals in two games under new Albion boss Tony Pulis by scoring the only goal in the crucial relegation battle with Hull City at the Hawthorns.

Afterwards Berahino said he is enjoying playing regularly but he was non-committal regarding his long term future.

Berahino’s winning goal 12 minutes from the end lifted West Brom up to 14th place and consigned Steve Bruce’s men into the bottom three with other results going against them.

Albion’s match-winner paid tribute to his teammates for giving him the platform to grab a crucial winner late in the game.

“It’s brilliant that we got the clean sheet, as we’ve been conceding soft goals, so credit to the team for putting that hard work in not to concede,” Berahino added.

Pulis’s side face Everton at Goodison Park in their next league game and West Brom are 3.99 to make it three win from three under the Welshman, with Everton at 1.80 and the draw at 3.40.

Pulis once again faced questions on the future of his leading goalscorer after the victory but he insists he is much more concerned with getting players into the club.

“What we need to do is to add to that position and three or four other positions, to have a real run at staying at this league,” Pulis said.