Ronald Koeman: Teams are wising up to Southampton 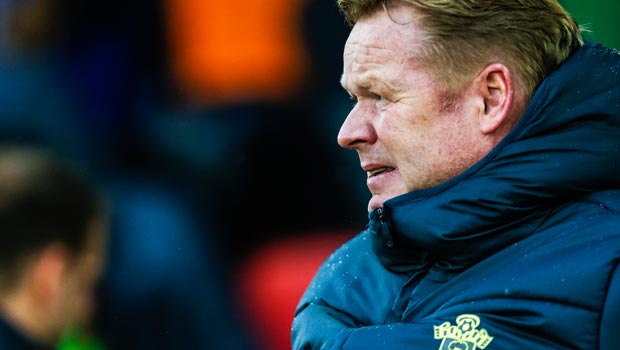 Southampton boss Ronald Koeman believes opposition sides have become more aware of the threat his team possesses as the Premier League campaign has gone on.

The south coast club have enjoyed a fabulous season to date and currently find themselves in fifth position in the table, just a point outside the Champions League places.

The Saints have, however, only won one of their last four matches in the league and were defeated by European rivals Liverpool 2-0 at St Mary’s last time out.

Dutchman Koeman believes that the defeat to the Merseyside club was a prime example of the new mentality sides have when they face the Saints, referring to the defensive approach that Brendan Rodgers’ team took last Sunday.

He said: “I watched back the game of Liverpool, and most of the time Liverpool were not defending with three centre-backs, they were defending with five at the back, and that’s more difficult.”

The 51-year-old expects a similar approach from West Brom when his side travel to the Hawthorns to take on Tony Pulis’ team on Saturday.

Albion are unbeaten in their last four matches and indeed have only lost once since Pulis took over as manager at the start of the year, with Koeman very aware of the test that awaits his side in the Midlands.

He continued: “Teams are now playing not so open – they know our qualities and this Saturday will be exactly the same. They go back, they are defending and they will wait for one or two good counter attack moments to score.”

Saints are slight favourites to secure an away victory at 2.30 with the hosts on offer at 3.27. The draw is available at 3.04.