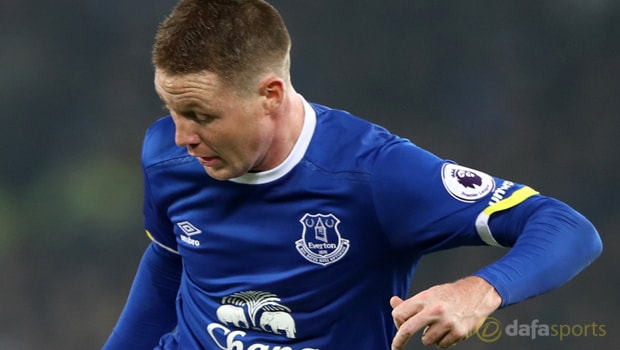 Everton midfielder James McCarthy will not be sold in January but could be allowed to leave in the summer, according to manager Ronald Koeman.

The Republic of Ireland international joined the Toffees from Wigan in 2013 when Roberto Martinez took charge, and he has made 99 Premier League appearances.

However, he has fallen down the pecking order this season under Koeman following the addition of Idrissa Gana Gueye from Aston Villa over the summer.

McCarthy may be handed the chance to reclaim his spot in midfield throughout January as Gueye has travelled away to represent Senegal in Gabon at the Africa Cup of Nations.

Morgan Schneiderlin’s acquisition from Manchester United for £22million earlier this week may mean that McCarthy still has a fight on his hands, but Koeman insists the former Hamilton man will not be sold in the winter window.

The Dutchman says that he hasn’t been informed of any interest for McCarthy but admitted he could be allowed to leave in the summer.

“There’s no chance James will leave in January – I don’t know about interest for him,” Koeman told the Liverpool Echo.

“After the summer yes, but not now because the player has shown what I like – he has shown his quality and now it is important for this player to get some long time fitness and not be disrupted by injuries.”

The former Southampton boss will be looking to rebuild his squad over the summer and has already allowed Oumar Niasse and Tom Cleverley to join Hull and Watford on-loan respectively.

The likes of Darren Gibson, Arouna Kone and Bryan Oviedo are all expected to be sold at the end of the term and Koeman says he is eager to try and improve his options.

He added: “We’d like to be stronger, we like to improve. If we can do that with the players that we have then we will, but if we can sign better players then we will do it.

“Most of the players know the situation. Some players now in the squad don’t have that future for Everton.”

Everton can be backed at 4.50 to take all three points from their next outing when they welcome Manchester City, who are priced at 1.80 to come out on top, at Goodison Park on Sunday, while the draw is available at 3.80.