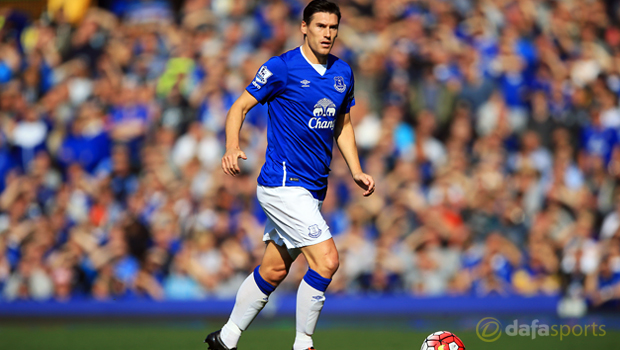 Everton boss Roberto Martinez has heaped praise on Gareth Barry and feels he is an excellent role model for those around him.

Barry is in his third season at Goodison Park, having initially signed on loan for the 2013-2014 campaign, and has become an integral part of the team in the centre of the park.

The former Aston Villa and Manchester City schemer is now 34 but still retains the same appetite for the game and hunger to succeed that he did as a youngster.

He has earned 53 England caps but is now focusing his efforts on club football and the task of trying to help take the Toffees to the next level.

Barry moved into third place on the all-time list of Premier League appearance holders when he turned out against Sunderland at the weekend and played a full part as the Merseysiders recorded a 6-2 victory.

And his manager believes that the Hastings-born veteran’s professionalism is rubbing off on others at the club.

“Everything he does, he does for a purpose, the way he trains is as a leader, he is an inspiration to the other players and he could go on and on and on until the body has enough,” said the Spanish tactician.

“It is impossible to know when that will be but he is a very, very fit footballer, but he plays with his brain and his technical ability allows the others to be effective around him and for me he doesn’t get the credit he deserves from the outside.”

Everton are currently ninth in the Premier League table, just one point and one place behind local rivals Liverpool, and can be backed at 2.80 to make it back-to-back top-flight wins when they travel to Upton Park to take on West Ham (2.50) on Saturday.