Robben celebrates after scoring against Barcelona 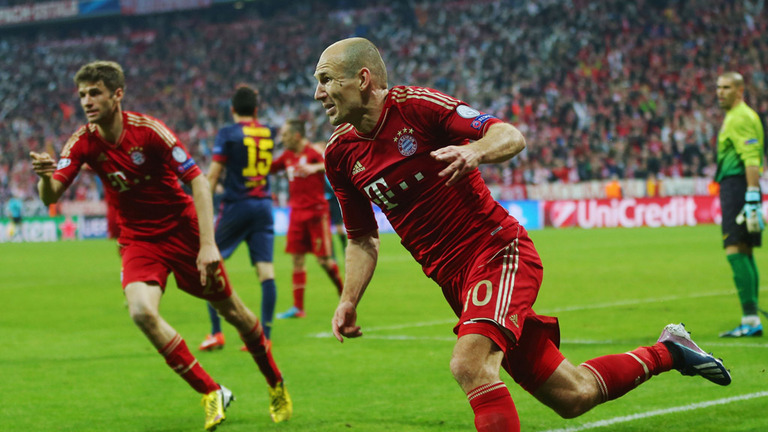 Bayern Munich stamped their dominance over Barcelona by defeating Catalans at 0-3.

After winning the first leg 4-0, the Bavarians scored three goals in the second half to complete their route of the Spanish outfit, winning on a 7-0 aggregate score.

Arjen Robben and Thomas Muller netted for the visitors, while Gerard Pique added an own goal to set-up an all-German final at Wembley on May 25, as Borussia Dortmund advancing after eliminating Real Madrid on Tuesday.

Tito Vilanova’s men played without Lionel Messi as they felt his hamstring injury will hinder him from performing. They were almost caught out early in the match as Bastian Schweinsteiger’s ball sent Robben racing to make an attempt but Pique was able to clear with a challenge.

On the other hand, Manuel Neuer was tested in the 24th minute as Pedro’s turn and shot from long range needed to be tipped to go over the crossbar.

Xavi also had a chance to score for the Catalans as Cesc Fabregas diverted a Daniel Alves cross back to the skipper outside the box, but his volley painfully went over the top.

In the second half, Bayern’s attacking mentality was on display and they were rewarded by a beautiful goal by Robben. With space on the right, the Dutchman drove to the left and curled an effort past defenders and beyond Victor Valdes’ dive.

David Villa tried to make a quick comeback but had his shot off target, before Franck Ribery played Robben who shot wide despite having the better option to pass to Mario Madzukic who was unmarked on the right side.

Pique’s goal came after he collected Ribery’s cross with his knee to send it past his own keeper into the back of the net.

And closing the humiliating night for the Catalans was Muller, who headed home a shot in the 76th minute after Ribery lifted the ball past Alex Song.