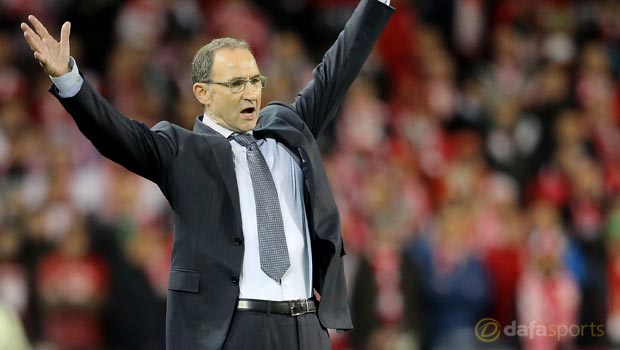 Republic of Ireland manager Martin O’Neill says this weekend’s friendly with England in Dublin is the ideal preparation for his side’s vital Euro 2016 qualifier against Scotland.

Roy Hodgson’s Three Lions will be at the Aviva Stadium on Sunday, the first meeting between the neighbouring countries in Dublin for 20 years.

O’Neill is looking forward to what has become an eagerly anticipated match with England.

“It’s a great game for us to be involved in – and I’ve said that since it’s been announced – really great, as we have a game against Scotland the following week and, barring injury, it will be great preparation for us considering some of the players will not have played for about a month,” the Ireland boss said.

Having lost to Scotland in Glasgow in November, Ireland know they must defeat Gordon Strachan’s men in order to get control of their Euro 2016 qualifying destiny again.

O’Neill feels the England game will be ideal to get his players back to full speed.

“Fitness, whatever you think and how well they are looking after themselves, it will drop a little so that’s what this week is about, building up to that, building up to the England game and then forcing it against Scotland,” he said.

While he acknowledges the importance of the game against England, O’Neill is determined not to lose sight of the bigger prize.

“Of course the England friendly game is a big, big game, but it’s exactly that, a friendly match. It gives us the opportunity the week before Scotland to prepare for that. Scotland, of course, is the ultimate,” he added.