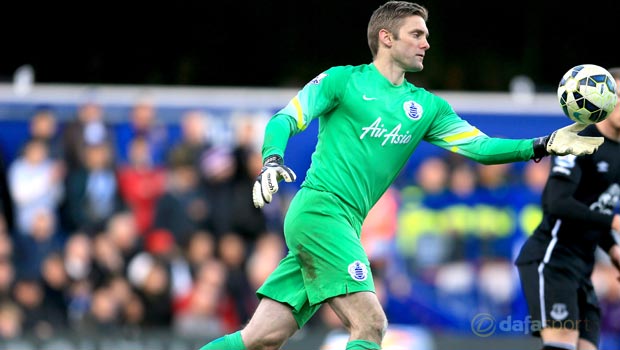 QPR goalkeeper Rob Green is keeping his fingers crossed that he may yet get a call into the England squad for the European Championships next summer.

A recent international recall has given Green hope of a place in the England squad for Euro 2016 in France for which the Three Lions are priced at 11.00 to win.

The R’s stopper has been called back into the England fold due to injuries to Southampton’s Frasier Forster and West Brom’s Ben Foster, but he is hoping he gets the chance to prove he is back to his best and ready to represent his country again.

Green said: “France next year is hopefully a target.”

Green was brought back into the England set-up for matches against Lithuania and Italy and it offers a potential shot at redemption after the 2010 World Cup in South Africa.

Green will be remembered for allowing a Clint Dempsey shot to squirm through his grasp for a USA equaliser during a group game and was dropped after that howler and has only featured once since.

He claims to be over that blunder and is looking ahead to a possible return to action with the national side.

“I don’t think about it,” Green said. “The only people who mention it are away fans and journalists.

“It’s a game that happened five years ago. We didn’t lose the game, but the only problem is that we are talking about it now.

“I’m just delighted to be back after a few years out. I didn’t think it was over, though time probably wasn’t on my side.

“You’ve got players like Jack Butland coming through. Joe Hart’s only 27 with many years to come and it perhaps wasn’t a focal point for me in terms of goals and aims.

“But it’s been great. I’ve thoroughly enjoyed it. It’s always pleasing to be involved.

“I’m not being foolish towards the situation. I’m fairly pragmatic. It wouldn’t have happened if we didn’t have so many injures, but these things happen in football.”