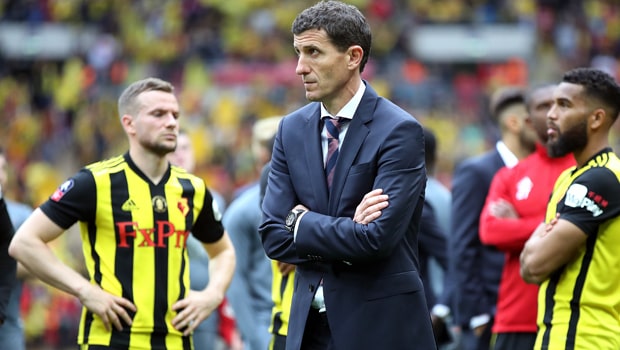 Watford boss Javi Gracia claims there are positives to take from his side’s 6-0 FA Cup final defeat to Manchester City.

The Hornets went into Saturday’s final as the underdogs and they were humbled at the national stadium as City won their second FA Cup.

Midfielder David Silva opened the scoring before Gabriel Jesus’ volley at the far post but City in total control.

The Brazilian then went on to grab another, while Raheem Sterling also scored a brace. Midfielder Kevin De Bruyne stepped off the bench to help his team add to their tally but Gracia’s men had chances of their own.

Midfielder pair Roberto Pereyra and Gerard Deulofeu missed chances during the 90 minutes but Gracia has urged his team to build on their achievement. “We did really well in the first part,” said Hornets head coach Gracia.

“We played against them twice [this season] and in both games we have competed well. It was really tough but we tried.

“It was a good experience and I know in this moment it is hard for us to look at the future. But we are not satisfied with the defeat and it will be good for us in the future.” His comments have been echoed by goalkeeper Heurelho Gomes, who believes the club will keep growing under his management.

“We will go again,” he said. “Maybe it will be even harder to get to the final next time but it is possible. We just need to keep going as a club, to keep growing as a club.

“It shows where this club is going. A few years ago, we were in the Championship and nobody expected us to come here. We are still growing. Of course, the result is hard to take but we faced one of the best sides in the world.

“It has been an amazing journey. No one will forget the comeback against Wolves [in the semi-finals].”