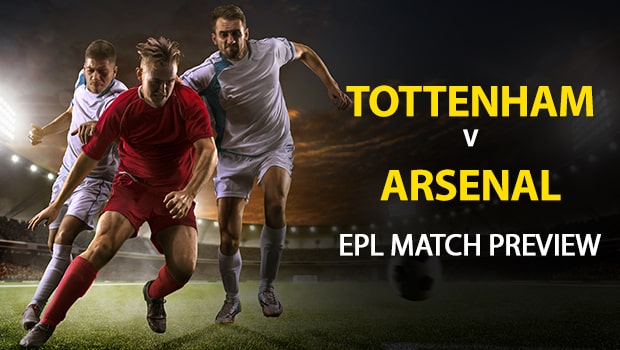 Match day 29 of 38 kicks off this weekend as Tottenham and Arsenal face off at Wembley Stadium. Things are getting interesting for the top four as Manchester United — at the time of publication — sits just 1 point behind Arsenal for the No. 4 spot in the Premier League.

Draw: There’s a 26 percent chance the match ends in a draw. There’s a draw in 23 percent of AccuScore sims, suggesting no added side value on the draw.

Last 6: At the time of publication, Tottenham is coming off a 2-1 road loss vs Burnley last weekend. They have 2 losses and 4 wins in their last 6 overall. They do, however, have a mid-week clash with Chelsea before the weekend’s matchup. Arsenal has 4 wins and 2 losses in their last 6 overall also. They match up with Bournemouth mid-week prior to this weekend’s fixture with Tottenham.

Yellow Cards: Tottenham is No. 16 in the league in yellow cards — showing quite a bit of discipline in most of their matches. Arsenal, however, is No. 8 in the league. Something to keep an eye on as Arsenal could ultimately hurt themselves with these penalties.

Alexandre Lacazette has about a 25 percent chance to score for Arsenal. He averages 1.7 shots overall per sim, 0.71 shots on goal per and 0.28 goals per sim.

Harry Kane have close to a 61 percent chance to net the ball for Tottenham. He averages 4.73 shots overall per sim, 2.31 shots on goal per and 0.94 goals per sim.

This is a 4-star (out of four) AccuScore hot trend pick. There’s a 52 percent chance Tottenham wins this match in regulation. Tottenham win 61 percent of AccuScore sims, suggesting added side value on the favorites. The average margin of victory for Tottenham in simulations is +1.06 goals.