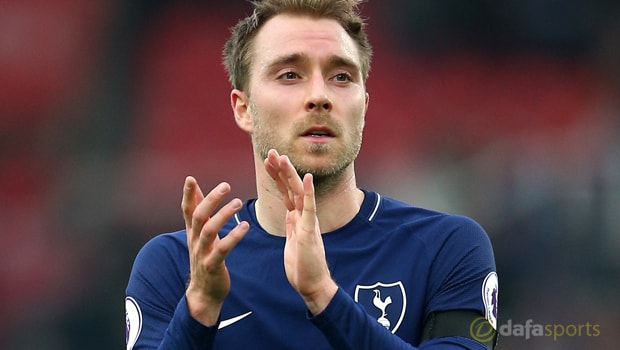 Tottenham midfielder Christian Eriksen insists the club have proved this season that they have a never-say-die attitude under coach Mauricio Pochettino.

Spurs continued their march for the top four on Saturday when they recorded a 2-1 win away at strugglers Stoke City.

Eriksen opened the scoring with a fine finish, but the Potters responded with a goal from Mame Biram Diouf.

However, Eriksen’s free-kick was the difference as he beat Jack Butland to ensure Spurs moved level on points with Liverpool.

Pochettino’s men have now won their last four games in all competitions and they still have a game in hand over the Reds.

Tottenham are unbeaten in 14 Premier League games and they have won 11 of those.

Eriksen believes that record proves just how much they have improved under the former Southampton boss.

“I think people know by now we won’t lie down,” he told Spurs TV.

“We had a few mistakes in midfield which gave them a lot of chances the other way and that’s what kept them in the game, but we got the win again.”

Spurs take on Manchester City and Brighton in their next two league games before they then face Manchester United in the semi-finals of the FA Cup.