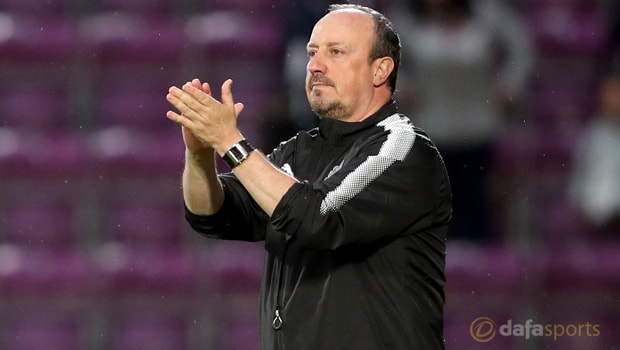 Newcastle coach Rafa Benitez admits he could be interested in signing striker Fernando Torres this summer.

The former Spain international confirmed earlier this season that he would be leaving Atletico Madrid after a second spell with his boyhood club.

After some disappointing loan spells around Europe, Torres returned to Atletico on a permanent basis in 2016, playing his part this season to help them secure Europa League glory.

Torres has largely been utilised from off the bench this season at the age of 34 and he has scored three goals in 26 games.

Torres originally left Atletico for Benitez’s Liverpool in 2007 and he worked under his fellow Spaniard for three years before the latter left Anfield in 2010, only to team up again at Chelsea when Benitez took over on an interim basis for a season that culminated in Europa League success.

Now, after winning his first trophy with Atletico, Torres is planning for the future and reports claim he is considering a lucrative move to China.

However, Benitez is willing to reunite with the striker this summer to bolster Newcastle’s firepower, providing he gets the financial backing from Mike Ashley.

Torres scored 71 goals in 116 games under Benitez and the Spanish manager has revealed his desire to sign him once again, although he accepts it may never happen.

“I think it will be harder for him to come, not because we don’t want to,” he told MARCA.

“I don’t know what’s going on in his head, but maybe he is thinking about something else. It would be appealing, but I don’t think it would be easy.

“In Liverpool he was sensational. Then we went to Chelsea and, although he had a bad time when he arrived, he was essential for us in winning the Europa League.”