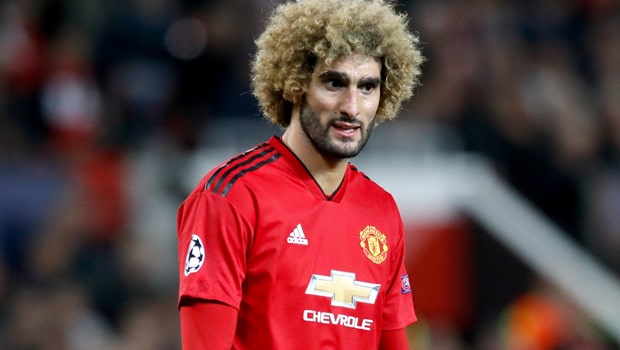 Marouane Fellaini claims the 12-point difference between his Manchester United side and Premier League leaders Manchester City is not a true reflection of the gap between the rivals.

The 30-year-old Belgium international was left frustrated after United slipped to a 3-1 derby defeat at the Etihad Stadium before the international break, which leaves them eighth in the table – seven points adrift of Tottenham in the top-four Champions League qualification places.

City sit top with 10 wins and two draws from their 12 games, while Liverpool are two points behind them and third-placed Chelsea are the other unbeaten side at this stage.

United have lost four of their games already and endured their worst start to a Premier League campaign after seven games when they had collected just 10 points.

Despite the apparent gulf in difference between the sides, Fellaini insists that they are not that far behind and he is confident they will continue to get closer to them in the future.

When asked if the gap between United and the reigning champions is significant, Fellaini said: “I don’t think so. I remember when I arrived in England it was a top four, now it is a top six, so every year it is more difficult.

“Next season we will see how it changes and in two and three years I think every year it is more difficult, the intensity is higher, so that’s why the Premier League is attractive.

“Manchester City are strong, but I think they will lose. Ok, they are very good and they have good players but it’s possible to beat them. We lost, but we have the second game at Old Trafford and we will see.”

City, who broke the 100 points barrier when winning the title last term, are 1.25 to win the Premier League this season, while United are 4.50 to secure a Top 4 Finish.