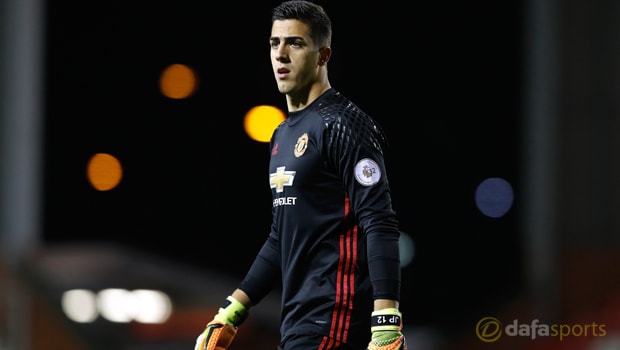 Manchester United have confirmed that goalkeeper Joel Pereira has signed a new contract at the club, with manager Jose Mourinho predicting a bright future for the youngster.

The Red Devils have tied Pereira down until the summer of 2021, despite the fact he has only made two appearances for the club.

Pereira, who graduated from the club’s academy in 2015, made his debut in January after playing in the club’s fourth-round FA Cup win over Wigan Athletic.

He was then handed a start in United’s Premier League clash against Crystal Palace in May and the 21-year-old is highly thought of at Old Trafford.

With his future now confirmed, Pereira admits he is excited for the chance to try and make more first-team appearances.

He told the club’s official website: “I have been at United for a number of years now and since the first day here I have enjoyed every minute.

“Over the last season I feel I have made great progress as a goalkeeper and this will stand me in good stead for continuing my development as a Manchester United player.

“There have been many memorable moments for me at this club – however, making my debut for the first team at Old Trafford was unbelievable for me and my family.”

Mourinho was also quick to praise the stopper and he believes he could become one of Portugal’s best goalkeepers.

“Joel progressed really well during the course of the last season through hard work and commitment every day in training,” he said.

“I know I have said this before but I really do believe, if he continues his development and continues to work hard, he really can become the best Portuguese goalkeeper of the next generation.”