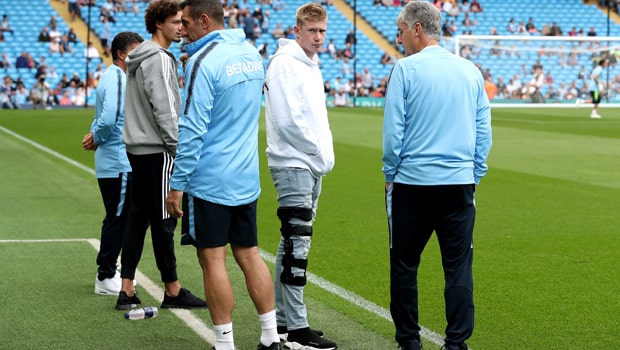 Kevin De Bruyne wants to make a return from injury in time to face Manchester United on November 11.

The Manchester City playmaker has been out since August after suffering a knee injury in training.

Watching on from the stands isn’t easy for the Belgian, particular with City looking so disjointed in their midweek Champions League loss at home to Lyon.

The 27-year-old enjoyed a superb campaign for title-winning City last season and he wants to be back playing as soon as possible.

The next international break follows Manchester City’s trip to Liverpool on October 7.

Pep Guardiola’s team will then be looking at games against Burnley, Tottenham and Southampton – plus two against Shakhtar Donetsk in the Champions League – before a showdown with city rivals United in the second week of November.

That crunch collision at the Etihad Stadium is already the focus point in De Bruyne’s mind as he continues his rehabilitation.

“Hopefully I can be back soon, help the team, and perform well.

“I’m hoping to be back after the next international break. I think I will be back for the derby.”

De Bruyne missed just three Premier League games over the last two season, featuring in all bar one of City’s games last season on their record-breaking march to the title and scoring a personal best tally of eight Premier League goals along the way.

Given the alarming manner in which City coughed up possession against Lyon this week, Guardiola will be as keen as anyone to have the Belgian fit again.

Manchester City are 1.67 to win the Premier League this season, with Liverpool now 3.00 to depose them.