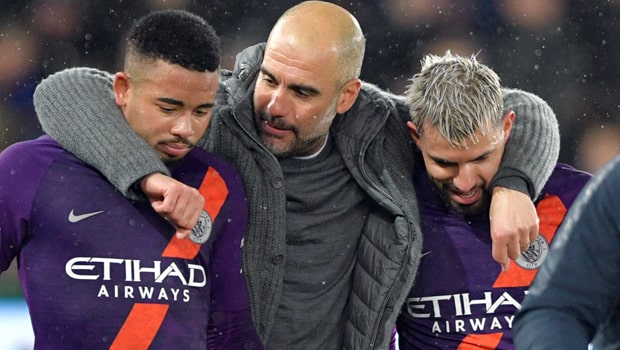 Manchester City boss Pep Guardiola insists it is ‘incredible’ that his side are still in with a chance of four trophies after his team battled past Swansea in the FA Cup on Saturday.

The Citizens remain the only side able to win the quadruple this season, but they looked like going out of the FA Cup at the Liberty Stadium.

Swansea raced into a 2-0 lead after scoring twice inside nine minutes, but Bernardo Silva started the fightback in the second half.

An own goal from Kristoffer Nordfeldt put City level before Sergio Aguero scored two minutes from time to send City through thanks to a 3-2 scoreline.

They are now top of the Premier League, through to the Champions League quarter-finals and have already won the League Cup.

When asked about his team, Guardiola told BBC Sport: “Fighting for everything is the most important thing for the club.

“People say we are going to win three or four titles and the day we drop one competition they say it’s a big failure for Manchester City.

“The most incredible thing after what we achieved last season is in this stage we are fighting for everything.

“So, most important for the club – more than winning one title – is having the mentality to be there until the end and fight for the titles in this stage of the season.

“That’s important because for the future, for the new players and managers who are coming, they will learn from this group of players, and this group of people, that we never give up and fight for every single game and title until the end.

“That is the best lesson.” After beating Schalke in the Champions League, City – drawn against Spurs in the quarter-finals – are now 3.25 to lift the trophy for the first time.