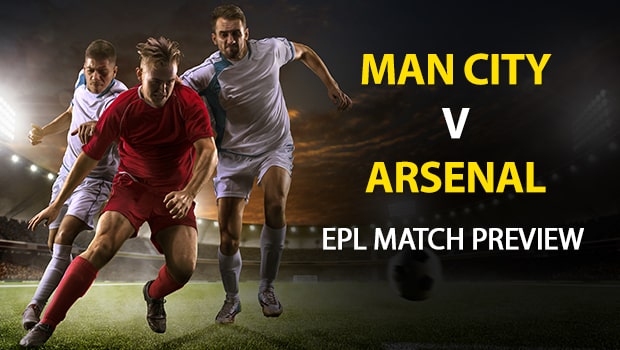 Etihad Stadium is the venue for a must-watch matchup this Sunday as Manchester City and Arsenal go head-to-head.

Draw: There’s a 15 percent chance the match ends in a draw. There’s a draw in 21 percent of AccuScore sims, suggesting some added side value on the draw.

Head to Head: Man City has won their last 4 matchups with Arsenal. They most recently met in Premier League action back in August of 2018 when Man City won 2-0. Arsenal is goalless in their last three games vs Man City, last scoring against this opponent on November of 2017.

Pierre-Emerick Aubameyang has a 34 percent chance to score for Arsenal this weekend. He averages 1.75 shots overall per sim, 0.69 shots on goal per, and 0.42 goals per sim.

Raheem Sterling has close to a 52 percent chance to score for Man City. Sterling averages 2.66 shots overall per sim, 1.33 shots on goal per and 0.73 goals per sim.

There’s a 44 percent chance the total combined score stays below 3, 3.5 goals. That happens in 54 percent of AccuScore sims. The under is a 4-star (out of four) AccuScore hot trend pick.