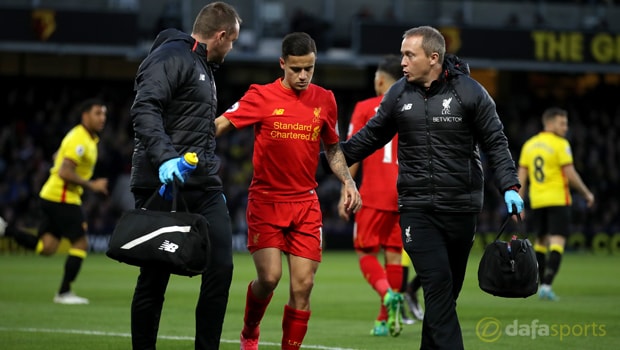 Liverpool midfielder Philippe Coutinho insists he should be fit to return in the near future after suffering a dead leg during the Monday night clash with Watford.

The Brazil international was hoping to play a key role in his side’s win at Vicarage Road but he was forced off early on.

Coutinho went to round in the fifth minute after a challenge from Watford defender Adrian Mariappa and he immediately began clutching his right thigh.

The former Inter star received medical treatment but he was unable to recover and was replaced by England international Adam Lallana in the 13th minute.

Although the 24-year-old was forced off, Liverpool grabbed all three points thanks to Emre Can’s superb overhead kick.

The Germany international scored one of the goals of the season to help the Reds continue their push for a top four finish but Klopp was in the dark over Coutinho’s injury after the match.

He told reporters: “He has a dead leg, hopefully it’s not too serious but of course it’s really painful and no chance [he could continue].

Everybody could see he tried hard, but no chance.” However, Coutinho was quick to play down any fears after posting a picture of him and Can on the coach home.

The Brazilian said: “Thanks for all the support, it isn’t serious big three points.”

Coutinho’s comments will come as a big relief to the club’s fans, with the Reds so close to a top-four finish.

He will be hoping to prove his fitness for Sunday’s clash with Southampton with Liverpool 1.57 to win, with the draw 4.00, while the Saints are priced at 5.50.