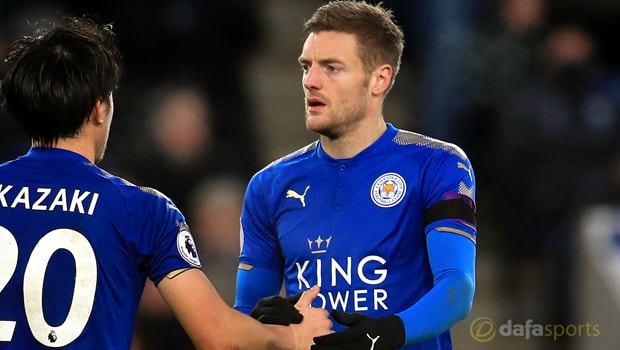 Leicester City striker Jamie Vardy says he remains completely focused on his future with the club despite transfer speculation linking him with a move away.

The England international has been touted this month as a potential target for Chelsea and Everton, but he insists he won’t be taking any notice of those rumours unless the club comes to him.

“It doesn’t affect me. You just take it with a pinch of salt, it’s just rumours…I am here at Leicester, concentrating on Leicester until Leicester tell me otherwise,” Vardy said.

This weekend will see Vardy and the Foxes in another intriguing FA Cup tie, as they take on Peterborough in round four.

Vardy came up against his former non-league club Fleetwood Town in the previous round, with Leicester needing a replay to get through.

Their trip to League One outfit Peterborough means a clash with Alex Penny, who signed for Posh last summer after impressing at Vardy’s V9 Academy, which aims to showcase non-league talent.

Vardy is the poster-boy for non-league players making their way to the top of the game and he is happy to try and put something back in and help another player live the dream.

“We set a target and we achieved it, but we know there is still talent out there that are capable of getting into the Football League and playing professionally,” he added.

“It nearly didn’t go ahead because there wasn’t a sponsor available who wanted to put their money in so I have done it again myself.”