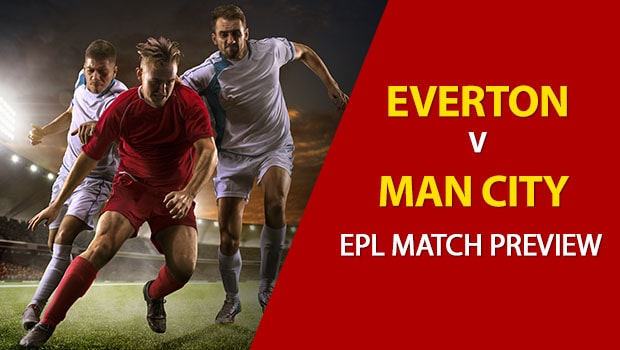 Man City will look to bounce back from their first loss of the season last wee vs Chelsea, while Everton looks to pick things up after a 2-2 draw vs Watford. Everton have a tough match ahead as it’s never easy to beat Man City in general, but especially at the Etihad Stadium.

Betting on the Draw: Odds indicate there’s a 12 percent chance the match ends in a draw. There’s a draw in 17-to-18 percent of AccuScore sims, suggesting some added side value on the draw.

Referee Named: Craig Pawson was appointed head referee for this match. Man City were unbeaten last season with Pawson as the referee, but this is his first assignment to a City game this season.

Head to Head: These two sides last faced off in Premier League action back in March of 2018 when Man City won 3-1.

For Man City, we’ll have our eyes on Raheem Sterling who has close to a 50 percent chance to score. He averages 2.83 shots overall per sim, 1.32 shots on goal per and 0.68 goals per sim.

Odds indicate there’s a 53 percent chance the total combined score stays below 3.5 goals. Taht happens in close to 57 percent of AccuScore sims, suggesting some added side value on the pick. The under is a four-star (out of four) AccuScore hot trend pick.