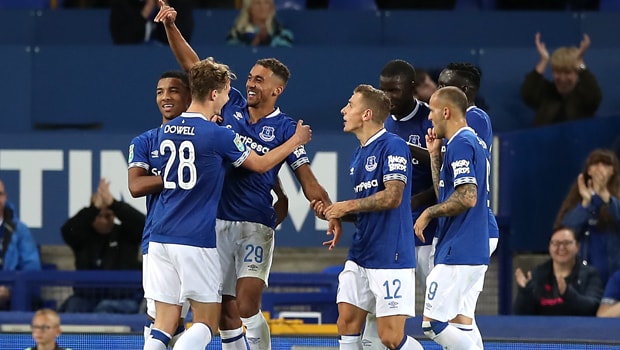 Dominic Calvert-Lewin is hoping to kick on and earn some Premier League minutes for Everton after netting in the Carabao Cup.

The 21-year-old scored twice in the 3-1 Carabao Cup second-round win over Rotherham after manager Marco Silva included him as one of eight changes.

Calvert-Lewin was handed opportunities to impress in the Premier League last season under Sam Allardyce, but he was unable to chip in with goals on a regular basis.

He turned out 32 times in the league in 2017-18, netting just four times, and was restricted to appearances from the bench in the second half of the season following the arrival of Cenk Tosun.

The arrival of Richarlison and some strong early-season performances from Theo Walcott have forced Calvert-Lewin further down the pecking order, but a three-game ban for the Brazilian may open up a potential route into the starting XI over their next few fixtures.

The forward is hoping to get his career back on track in 2018-19 and feels his hard work over the summer is starting to pay off.

“It’s nice to know that my hard work has paid off and I got the two goals,” Calvert-Lewin, who made his first start since March, told evertontv.

“We put a lot into the game to win it and have put a lot in during training. It’s definitely a cup we want to go for.

“It’s a chance to show what we can do and stake a claim for the league games. We did that, including the young boys.”

Everton can be backed at 1.53 to win their next outing against Huddersfield, who are priced at 7.00 to come out on top on Saturday, while the draw is available at 4.00.