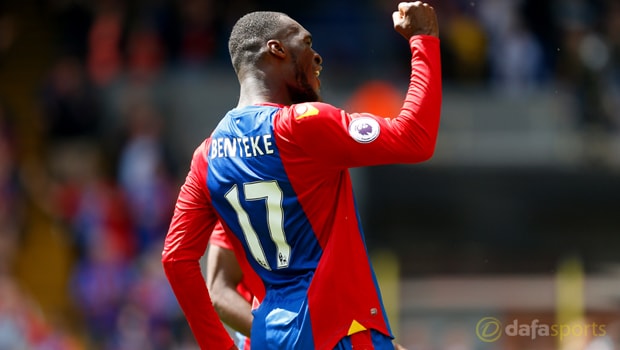 Striker Christian Benteke has played down rumours that he is set to depart Crystal Palace following the shock resignation of Sam Allardyce last month.

The Belgium international made a slow start to life with Palace after completing a £32.5million move from Liverpool last summer.

However, he appeared much happier following the appointment of Allardyce as Alan Pardew’s successor in December.

Allardyce signed up to a two-and-a-half-year deal at Selhurst Park and with the brief of steering them clear of a relegation battle last season.

The former England boss managed to get the best out of Benteke, who ended the season with 15 Premier League goals, and the rest of the squad as they finished seven points clear of the drop zone in 14th.

The 62-year-old then shocked his employers by stepping down after just five months at the helm and leaving them seeking a new manager.

Benteke admits that it was a surprise to see ‘Big Sam’ move on but he insists he still remains happy with the Eagles and is excited for the future.

“It was a surprise for me,” the Belgium international told reporters. “I was on holiday when I heard. He’s a big man, he knows what he’s doing.

“I’m still happy because I am playing the way I want to play and the last few weeks the team did well.”

Burnley boss Sean Dyche has recently emerged as a candidate to take charge, while Roy Hodgson and Garry Monk are both understood to be in the running for the job with Palace, who are priced at 5.50 to be relegated next season.