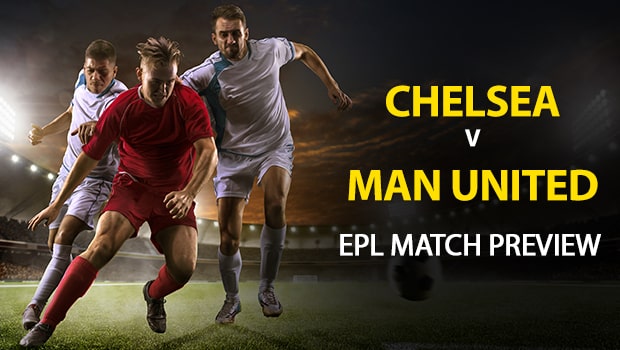 All eyes will be on Stamford Bridge this weekend as Jose Mourinho returns to a familiar venue as Manchester United face off with an unbeaten Chelsea. The Blues — led by Maurizio Sarri — have taken 20 of a possible 24 points this campaign.

Betting on the Draw: Odds — at 3.97 — indicate there’s under a 25 percent chance the match ends in a draw. There’s a draw in 27 percent of AccuScore sims, suggesting some added value on the draw.

Betting on the Total: The average combined score in the Premier League this season is 3.02 goals, with this match’s total (2.5) being set below that number.

Odds — at 1.88 — indicate there’s a 53 percent chance the total combined score goes over 2.5 goals; it does so in 54 percent of AccuScore sims. The average combined score after 10,000 simulations is 2.87 goals. The over is a three-star (out of four) AccuScore hot trend pick.

Injuries: The only injury concern on either side is Chelsea’s Antonio Rudiger who withdrew from Germany’s roster during the international break following a groin injury.

On a Roll: Chelsea’s Eden Hazard is having an impressive start to the season with seven goals scored already. Chelsea’s been able to dominate possession majority of the time, averaging 2.3 goals per match.

Head-to-Head: Chelsea have not lost at home to Man U since October of 2012. In that span, Chelsea have lost just two of the 16 meetings between the two sides.

All the side value in this matchup is either on Man U or the draw, suggesting a pick on United to keep it close on the road. Offshore odds indicate Chelsea has over a 55 percent chance to win in regular time, but AccuScore sims have that probability almost 10 percent lower. Chelsea’s average margin of victory is +0.45 goals.