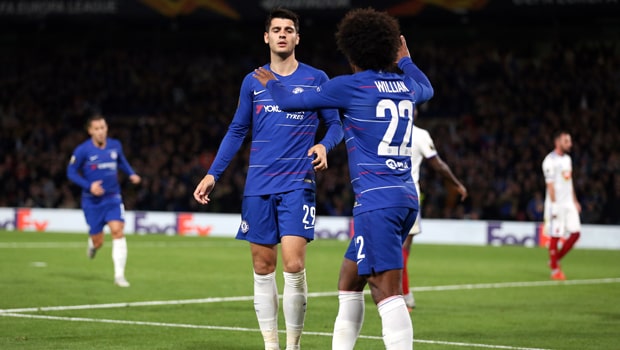 Maurizio Sarri hopes to see striker Alvaro Morata excelling in the months ahead after the Spaniard was Chelsea’s Europa League match winner against MOL Vidi.

The Blues forward scored his first goal since August after enduring a tough night, with Morata seemingly emotional after getting the only goal of the game.

Morata missed a brilliant chance to put Chelsea ahead when he blazed wide from close range but, 20 minutes from the end, he found the breakthrough goal. He appeared emotional afterwards as he hugged team-mate Willian in his celebration, and his manager was delighted to see how much it meant to Morata.

Asked if Morata had cried after scoring, Sarri said: “I don’t know, but if after a goal he wants to cry, I hope to see him cry very often.

France international Olivier Giroud has been ahead of Morata in the pecking order recently but, with Europa League, Premier League and Carabao Cup commitments to take them through the next couple of months, Sarri knows he’ll need both strikers playing their parts.