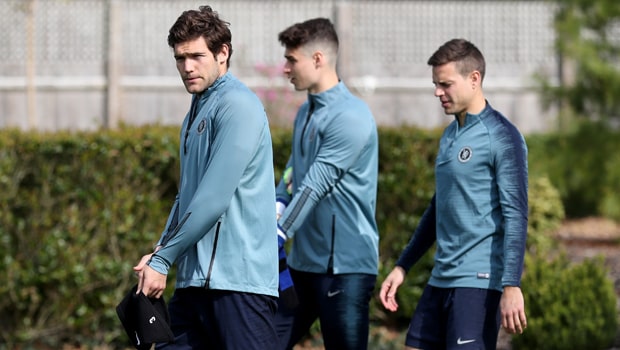 Marcos Alonso insists he is ‘very happy’ at Chelsea and has shrugged off speculation linking him with both Barcelona and Atletico Madrid.

The Spain international has spent the last three seasons at Stamford Bridge and he still has four years to run on his contract after putting pen to paper on fresh terms last October.

However, that has not stopped speculation linking him with a return to La Liga, with Barcelona reportedly seeing him as someone that could challenge Jordi Alba for a starting berth, while Atleti are in the market for a new left-back following the departure of another former Chelsea player Filipe Luis.

Alonso, therefore, appears to be a wanted man, but the 28-year-old insists he is happy at Chelsea and has no plans to leave anytime soon. When asked if he expects to remain at Chelsea for the 2019-20 campaign, Alonso told reporters: “Of course. I signed a new contract last year and I’m very happy here.

“I have four more years here and I’m very happy. The last three years have been amazing and I want more of that. I want to keep playing and winning things.”

Alonso did see his first-team opportunities restricted towards the end of last season, with Maurizio Sarri tending to go with Emerson Palmieri at left-back. However, Sarri left last month and Alonso believes it is a fresh start for the entire squad under new manager Frank Lampard.

“I think it’s a fresh start for everyone,” the former Fiorentina player added. “Last year is part of the past and now I just want to keep working, enjoy playing and to help the team win and get better.”

Chelsea finished third in the Premier League last season, a full 26 points behind champions Manchester City, but they are priced at 23.00 to taste overall glory themselves this term.