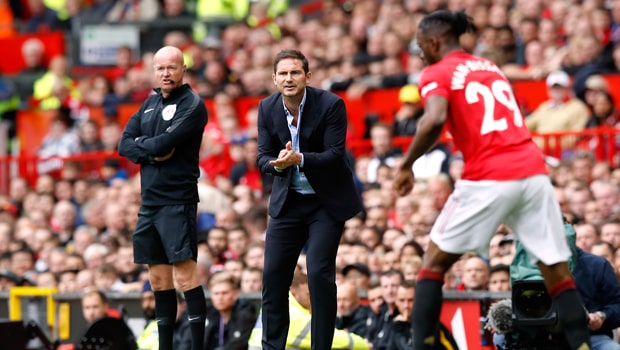 Frank Lampard’s first Premier League game as Chelsea manager ended in a 4-0 defeat at Manchester United but the new manager picked out some positives.

Marcus Rashford netted a brace alongside goals from Anthony Martial and Premier League debutant Daniel James for the Red Devils at Old Trafford. Chelsea however twice struck the woodwork in the opening half and dominated possession, with Ole Gunnar Solskjaer suggesting afterwards his United side were ‘lucky’ to be ahead at half-time.

Lampard saw plenty to admire, but admits his young team need to learn quickly. “There were lots of elements about today that I liked,” he told reporters. “We were intense in our pressure. We won the ball back high in lots of areas.

We dominated the midfield. For big spells in the first half they couldn’t get out. But football is won and lost in the boxes. They won it by being clinical.” It was the biggest defeat a Chelsea manager had endured in his first game since Danny Blanchflower’s team was beaten 7-2 by Middlesbrough in December 1978.

Lampard fielded a starting line-up containing three home-grown players – Mason Mount, Tammy Abraham and Andreas Christensen – as well as another, Fikayo Tomori, on the bench. With a transfer ban until next summer, the Chelsea boss knows he and his squad must react to the lessons of Old Trafford.

“I believe we have really talented young players but, let’s be clear, with the injuries we have and the fact we couldn’t bring in players, this is a work in progress – to a degree. We will have to learn harsh lessons and correct them pretty quickly,” he said.

Chelsea are 3.10 to finish in the top four this season and 1.83 to win their next game at home to Leicester City.