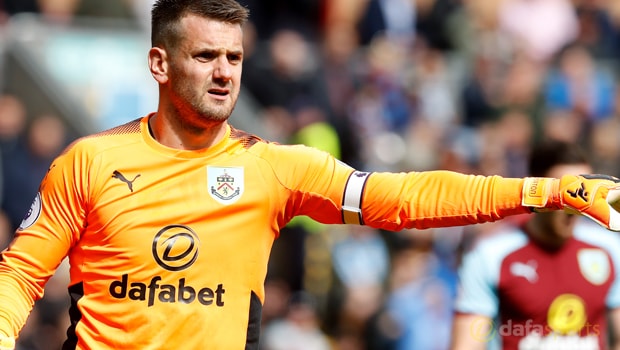 Burnley goalkeeper Nick Pope insists he is happy to see regular No.1 Tom Heaton back in training as the whole squad looks to kick on.

Clarets captain Heaton has been out of action since September after he picked up a shoulder injury in the match against Crystal Palace.

Pope was thrown into the deep end by boss Sean Dyche but he has produced some magnificent performances to prove he belongs in the Premier League.

Heaton is still working on his fitness and could soon reclaim his spot, but Pope insists the whole squad have been lifted by his return.

He told the Lancashire Telegraph: “When you’re injured it’s difficult, it’s the hardest thing about football, especially when you’re out for an extended amount of time.

“So to come back is a boost not only for him but for the lads to have the captain back out and there’s a buzz around.

“Everyone is buzzing for him really, to see him out there because we know how he feels. He’s looking good. It’s his first week so he’s not 100 per cent but it’s good to have him back out and looking good.”

Pope has made 20 Premier League appearances this season, despite never playing in the top flight before this season.

The 25-year-old has been pleased with his performances and he is confident of maintaining his recent form.

He added: “I’m trying to prove to everyone, not just myself. t’s been a good first 20 games for me, I’ve enjoyed being in this team so hopefully I can carry on.”

Pope will remain in goal for Wednesday’s clash with Newcastle at St James’ Park.