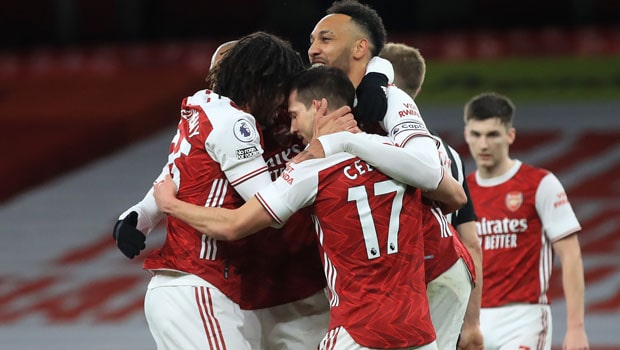 Gabonese striker Pierre-Emerick Aubameyang scored twice as Arsenal returned to winning ways with a 3-0 win over visitors Newcastle United at the Emirates Stadium on Monday evening.

The Gunners could only manage a goalless draw against Crystal Palace in their last Premier League game.

After a goalless first half, Pierre-Emerick Aubameyang gave the Gunners the lead 5 minutes into the second half, with his first goal since his goal against the same opponents in the FA Cup on the 9th of January.

Bukayo Saka scored the second goal ten minutes later from an Emile Smith Rowe’s assist before Aubameyang scored his second of the night and Arsenal’s third in the 77th minute.

The win puts Arsenal in top ten with 27 points from 19 games, they are now 7 points away from 4th position. It also makes their run become six games unbeaten in all competitions. It is also a fifth clean sheet in a row, the first since a similar run in February 2009.

Manager Mikel Arteta expressed his excitement with the result after the game.

“Really happy overall. Really positive performance, collective and individually we looked really solid and convincing from the first whistle. It took us a little bit longer than I expected to score the first goal but I really like the chemistry, cohesion and rhythm the team played with.” Arteta said.

Newcastle United’s poor run of form continues with their ninth game without a win and they sit fifteenth on the log, 7 points away from Fulham in the last relegation spot.

Newcastle United’s last win was in December 12 2020 with a 2-1 win over West Brom, since then the team has managed two draws and 7 defeats in all competitions.

Arsenal’s next Premier League game is against Southampton on the 26th of January but before then they will face the winner of the tie between the Saints and Shrewsbury in the FA Cup, to be played on Tuesday, at the weekend.

This could mean that Arsenal will play Southampton twice in the space of five days in the FA Cup and the Premier League.