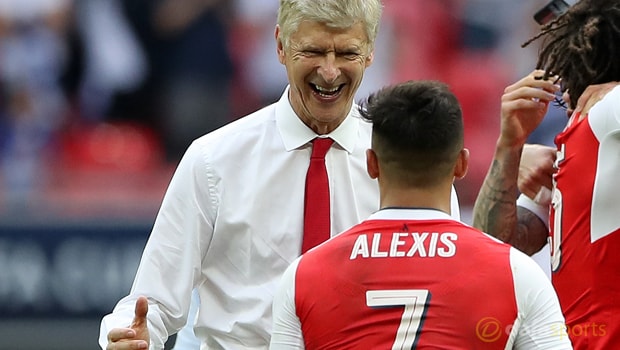 Arsene Wenger has reiterated that Alexis Sanchez is happy at Arsenal and he is set to return to first-team action during Sunday’s Premier League clash with Liverpool at Anfield.

The Chilean has missed the Gunners’ opening two matches of the new league season – against Leicester and Stoke – due to an abdominal strain and his absence has added fuel to the fire that he could be set to leave the Emirates Stadium before the end of the transfer window.

However, Wenger has now revealed the 28-year-old has been working hard in training and is available to feature against Liverpool this weekend.

“The early team news is that [Laurent] Koscielny is available for selection and Sanchez has worked very hard to be back again and he’s available as well,” Wenger said.

“He works very hard, is focused and gives absolutely everything. He looks ready. He’s not played for a long time so I will have to decide what I do with him.”

Sanchez’s’ future at Arsenal has been one of the talking points of the summer, with Manchester City and Paris Saint-Germain both being consistently linked with a move for his services.

Arsenal’s position has not been helped by the fact Sanchez is out of contract at the end of the season, but Wenger insists the former Barcelona ace is happy in north London and could still sign an extension to his current deal.

“He’s very focused, very happy,” Wenger added. “The fact that he’s in the last year of his contract doesn’t mean we have no chance to extend it.”

The Gunners’ chances of winning the Premier League title would be severely dented if Sanchez was sold.

They are currently priced at 15.00 to claim top-flight glory for the first time since 2004.