Arsenal, Tottenham and Leicester Win in The Europa League 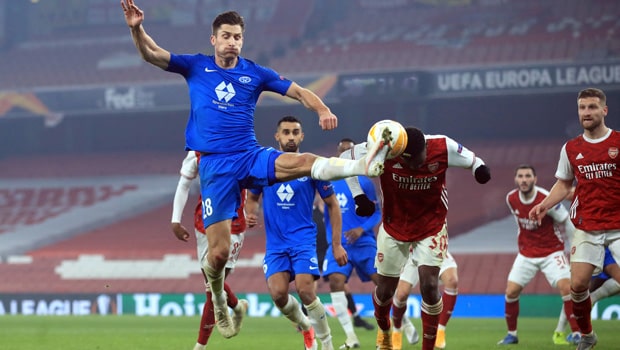 Arsenal got from a goal down to get their third win of the Europa League season after they beat Rapid Wien 4-1 at the Emirates Stadium.

The Gunners fielded a front line without Alex Lacazette and Pierre-Emerick Aubameyang in the game but still managed to score four.

However, it was the Norwegians who scored first through Martin Ellingsen in the 21st minute, but 56 the Gunners didn’t go into the break behind as Kristoffer Haugen scored an own goal from an Eddie Nketiah’s effort.

Sheriff Sinyan scored the second own goal on the night from Joe Willock’s effort to take the London based side into the lead in the 62nd minute.

The former Manchester City player scored a goal in each half to lead the 2016 English Premier League winners to a win against the Portuguese.

The 2013 FIFA U17 World Cup winner with the Golden Eaglets provided the assists for David Praet for a third goal before James Maddison scored the final goal.

Tottenham Hotspur beat Bulgarian side Ludogorets 3-1 as Harry Kane, and Lucas combined for the team’s first two goals before Lo Celso returned the two-goal cushion after the Claudius Keseru had pulled one back for Ludogorets.

In other matches, AC Milan lost to Lille 3-0 at the San Siro, Tunisian midfielder Yazici Yusuf scored a hat-trick to hand the team their first defeat since March.