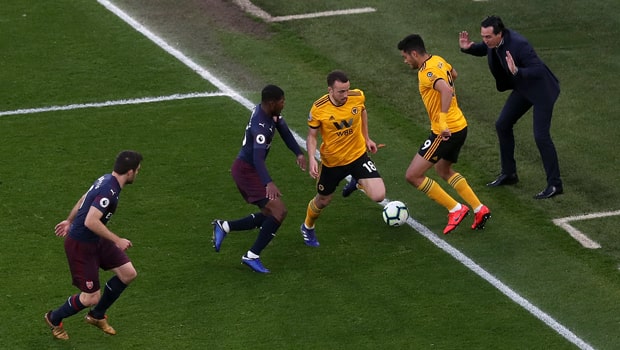 Arsenal boss Unai Emery believes his team can still qualify for the top four despite suffering a 3-1 defeat to Wolves on Wednesday night.

Emery made seven changes for the game as he looked for a response following the defeat to Crystal Palace last weekend. However, Arsenal looked out of sorts as they conceded three first-half goals.

Ruben Neves, Matt Doherty and Diogo Jota all found the back of the net to give Wolves total control. A late consolation goal from Sokratis gave the travelling fans something to cheer, but Arsenal are now under serious pressure in the race for the top four.

The Gunners are fifth in the table and a point behind fourth-placed Chelsea but their Spanish boss is refusing to panic.

He told reporters: “We lost in our hands the opportunity for fourth but we can also recover this opportunity. We have lost opportunities in the last two matches, losing to Crystal Palace and here [at Wolves], but the last three matches we play in the Premier League we have opportunities.

“Generally, we are now disappointed but we need to look at all the season. We lost this opportunity today, but we need to prepare as best as possible for Leicester. Again, it is very difficult but hopefully we can take something.

“We will be doing all we can in Leicester on Sunday to take the three points. Top four is the target, a difficult target, but we have a chance in this competition and also in the Europa League.”

Arsenal face Leicester on Sunday and the Foxes are 2.75 to pick up all three points.

The draw is 3.60, while Arsenal are 2.50 but they could be without striker Pierre-Emerick Aubameyang after he missed the game against Wolves through injury.