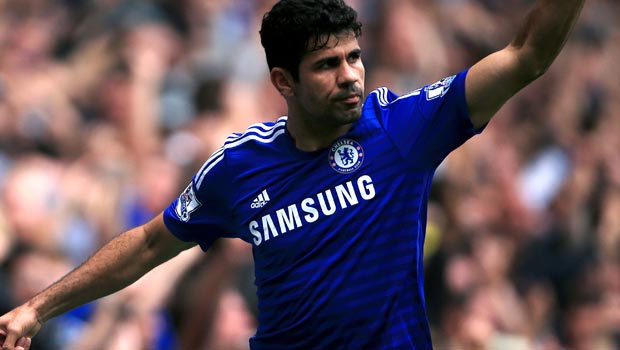 The 26-year-old Costa was ruled out of the game against Crystal Palace due to an issue with his troublesome hamstring, meaning Jose Mourinho started Loic Remy in the Spaniard’s place.

Despite the lack of their talismanic striker, Chelsea took the lead in the sixth minute after Oscar’s swerving 25-yard free-kick flew past Eagles keeper Julian Speroni.

Full-back Cesar Azpilicueta was sent off five minutes before half time, after a heavy touch led him to clatter Palace captain Mile Jedinak with his studs showing right in front of referee Craig Pawson, who had no choice but to dismiss the Spaniard.

Azpilicueta will now miss the next three games – a trip to Old Trafford next week, a League Cup tie away to Shrewsbury Town, and the derby game against QPR at Stamford Bridge.

The numbers on the pitch were levelled only moments later when Damien Delaney was shown a second yellow card after pulling back Remy.

Chelsea’s second goal came in the second half, when Cesc Fabregas played a one-two with Eden Hazard on the edge of the box before swiftly playing another with Oscar and slotting home his first Premier League goal in nearly four years – his last came against Chelsea for Arsenal.

Palace pulled one back in the 90th minute after Frazier Campbell lost Gary Cahill and tapped in after good work from Wilfried Zaha, but the points were always going away with Chelsea.

Eagles boss Neil Warnock is likely to get into trouble with the FA after criticising referee Craig Pawson after the final whistle.

The 65-year-old said “The one thing I’ve not missed when I’ve been doing media work is refereeing performances like that.

“I thought he was influenced today. He had four Chelsea players around him.”