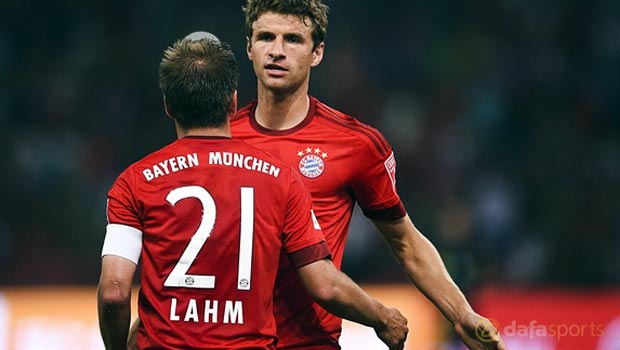 Reports have suggested that Muller is a target for Manchester United, with Louis van Gaal perhaps hoping to see the 25-year-old linking up with his former Bayern teammate Bastian Schweinsteiger at Old Trafford.

Van Gaal told a news conference in America that he expects to surprise people with a new signing in the near future, the Dutchman hinting that it may be a striker.

Lahm conceded that anything can happen in football, while refusing to rule out that Muller could leave the Allianz Arena.

“In football you can imagine everything,” he said. “It’s not my decision. In football, it goes so, so quickly.

“As a result, I certainly can’t give any guarantee for Thomas Muller or talk about whether I can imagine (him leaving). You can always imagine anything happening,” Lahm added.

German TV channel Sport 1 has claimed that the English club had offered €100 million for the Bayern attacker, but Lahm says he is confident that Muller will stay.

“We have a top team that’s very well-equipped this year as well and that can challenge on all fronts,” he added.

“So you don’t have to be worried about anything. And I’m definitely not worried about Thomas – I don’t think we’re going to let him go.”

Bayern Munich are 1.10 to retain their Bundesliga crown next season with Borussia Dortmund at 17.00 and Wolfsburg 15.00.