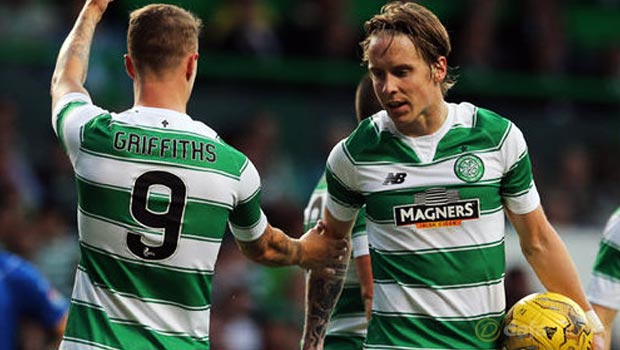 Ronny Deila has lambasted Stefan Johansen after the Norwegian midfielder became involved in an argument with Leigh Griffiths during Celtic’s Champions League clash against Stjarnan.

Celtic beat the Icelandic side 2-0 in their second-qualifying round first-leg encounter but Deila was annoyed when, with 16 minutes left, Johansen grabbed the ball to take a penalty after he had been upended inside the area, only for substitute Leigh Griffiths to eventually take the spot-kick, which he missed.

Deila confirmed after the match that Griffiths was the nominated penalty-taker and believes the incident may have led to the spot-kick eventually being saved.

He said: “It should be very clear, Leigh Griffiths was to take the penalties. We shouldn’t fight about a penalty.

“It affected Leigh. It put extra pressure on him. I don’t know why Stefan did that. But 3-0 is a different result from 2-0 so it’s clear that we’d be in a better position had we scored another goal.”

Meanwhile, Deila has confirmed that Gary Mackay-Steven, who was injured in the warm-up, will be fit for next Wednesday’s second leg.

Stjarnan beat Bangor City, Motherwell and Lech Poznan in last season’s Europa League before being thrashed 9-0 by Inter Milan in the play-off round.

They are currently languishing in sixth spot in the Urvalsdeild, Iceland’s top division, after winning the title for the first time in their history last year.

Celtic are 1/33 to win the Scottish Premier League title outright in the 2015/16 season while Stjarnan are 10/11 to beat IA Akranes in their next match on Saturday.