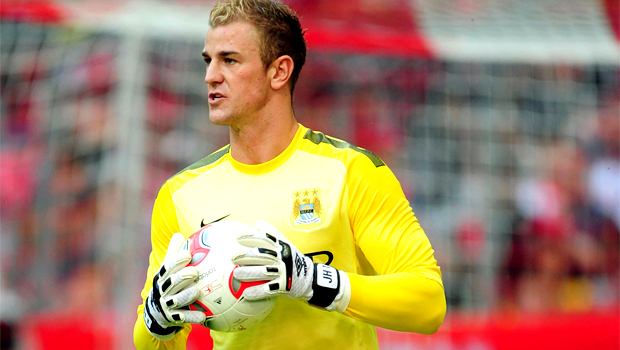 Manuel Pellegrini says he has no doubts over Joe Hart’s form and has backed the goalkeeper to play a major part in Manchester City’s title tilt this season.

The stopper was outstanding for the Citizens on their way to Premier League glory in 2011-12, but has struggled to rediscover those heights ever since, with former boss Roberto Mancini publically criticising his form on a number of occasions last term.

He again looked fragile in England’s friendly against Scotland on Wednesday and was at fault for the Tartan Army’s first goal, prompting Three Lions boss Roy Hodgson to warn him that his place is far from guaranteed in the side.

The 26-year-old has been City’s number once ever since displacing Shay Given three years ago and despite his problems, the club have failed to sign anyone who has been able to give him any realistic competition between the sticks since the Irishman’s departure in 2011.

This has been a summer of revolution at the Etihad Stadium, with Pellegrini bringing in a number of big names since his arrival in June in a bid to change how the Citizens play.

However, the Chilean says he is happy with Hart in the side and has backed him to rediscover the form that once saw him mentioned as one of the best goalkeepers in the world.

“I haven’t spoken with him but Joe has to demonstrate why he is the best goalkeeper in England every week he plays, ” he told reporters. “He is a very important goalkeeper and I have a lot of trust in him.

“Everyone can make an error in one match but personally I have a lot of trust in Joe Hart.

“I don’t have any problems with his performance and I am sure he will again demonstrate why he is the number one in England.”