One game at a time for Newcastle United manager Rafa Benitez 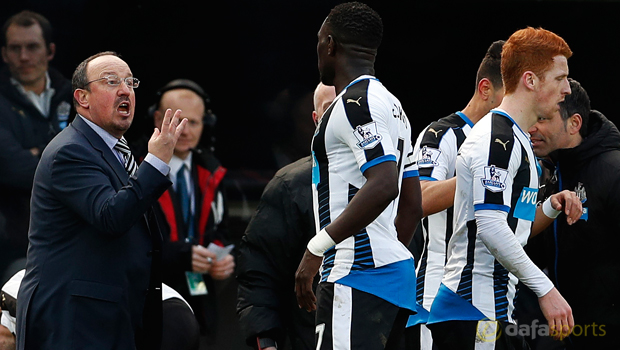 Rafael Benitez has told his Newcastle players to ignore the Premier League table and instead concentrate on taking their battle against the drop one game at a time.

The Magpies, who are priced at 1.25 to go down, boosted their hopes of survival with a 3-0 win over Swansea on Saturday and further enhanced their chances on Tuesday evening when they battled to a 1-1 draw against Manchester City.

However, heading into their final four games of the season they remain 19th in the table, two points behind 17th-placed Norwich and with time seemingly running out.

They have, though, improved significantly in their last couple of outings and Benitez appears to be working his magic following a difficult start to his reign after arriving last month.

Saturday sees them take on the Spaniard’s former club Liverpool, a game they are on offer at 5.50 to win, with the draw at 4.20 and the Reds installed as the 1.53 favourites.

They then have winnable matches against Crystal Palace and Aston Villa before closing their season out against title-chasing Tottenham Hotspur.

Following Tuesday’s draw, Benitez said he believed setting a points target would be the wrong approach for his team at this stage of the season and instead told his players to take their fight against the drop one game at a time, starting at Anfield.

Benitez said: “For us, it’s just don’t look at the table too much, it’s just concentrating on the next game, that’s it. If you are doing numbers, you are wasting time.

“You have to try to get three points in the next one, then approach the others with the same idea and see where you are after the last game.”