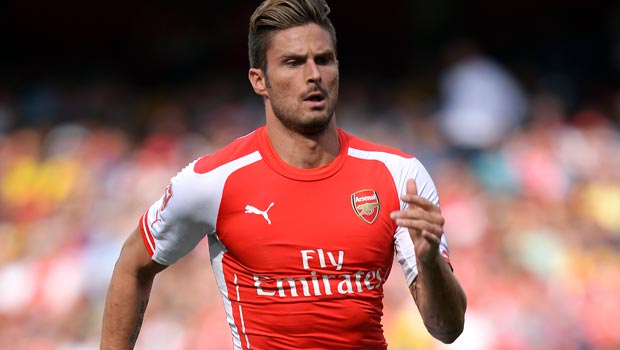 Arsenal manager Arsene Wenger could be forced back into the transfer market after revealing that Olivier Giroud will see a specialist on Wednesday to assess an ankle injury.

The France international suffered the problem in the 2-2 draw against Everton and initial reports from the club were suggesting that the striker may have a broken ankle.

Wenger has confirmed that Giroud will now see a specialist to find out the full extent of the problem, with the injury potentially leaving the side very thin up front.

The Frenchman was the club’s top scorer last season and without the striker the Gunners will have to rely on Yaya Sanogo to lead the line.

Arsenal have signed Alexis Sanchez from Barcelona this summer but the forward is finding it hard to settle into life in England and it seems it will take some time.

German World Cup winner Lukas Podolski is the only senior option to lead the line for the Gunners but he has been tipped to leave the Emirates before the end of the window.

There had been reported interest from Bundesliga outfit Wolfsburg, whilst Serie A champions Juventus have also been linked with a move.

Any exit will be very unlikely if Giroud’s injury if as bad as first feared and it may even tempt Wenger back into the market for more striking options.

Arsenal are in action on Wednesday in the second leg of their Champions League qualifying match against Besiktas.

The Gunners drew 0-0 away in the first leg and they are favourites at 1.38 to pick up the win, despite being without Giroud, Aaron Ramsey, who is suspended, and Mikel Arteta due to injury.