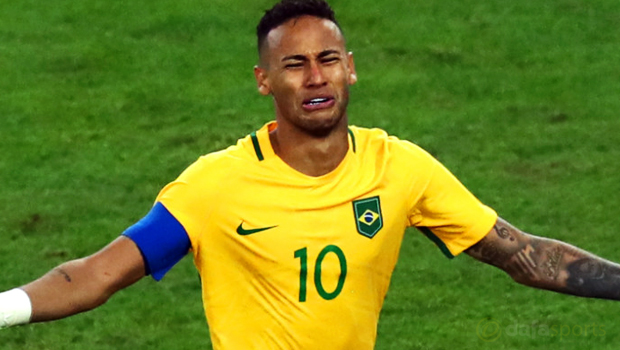 Neymar has stepped down as Brazil captain after guiding his side to Olympic glory on home soil.

The Barcelona ace scored the opening goal of the gold medal match against Germany at the Maracana on Saturday, as the two teams played out a 1-1 draw, before the skipper then stepped up and converted the winning spot-kick in the penalty shoot-out.

The victory secured A Selecao’s first ever gold medal in men’s Olympic football, but Neymar revealed after the match that he now intends to stand down as the national team’s captain.

“I do not take it as a burden, it is you [the media] who put it on me,” Neymar said in an interview with SporTV. “Today I have become a champion and I give up the captain’s armband.

It was something I received and honoured with affection.” The former Santos player was originally appointed Brazil skipper by former coach Dunga following the 2014 World Cup, and he insists that it has been an honour to captain the five-time world champions, but he believes the time is right for someone else to take over the role.

He continued: “It was an honour to be captain, but from today I stop being captain. I will send a message to [senior coach] Tite that from now he can look for another captain.”

Neymar, who has won 70 caps for the senior Brazil team, will continue to represent his country as they bid to qualify for the 2018 World Cup.

Tite’s side are currently outside the qualification positions for the tournament in Russia, but they are available at 9.50 to bounce back from their early struggles and secure their sixth world title in two years’ time.