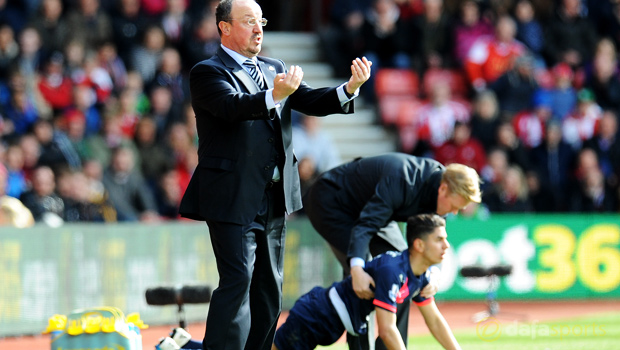 Newcastle boss Rafael Benitez believes his side may have to win five of their remaining six matches this season to avoid relegation from the Premier League.

The Magpies are currently second from bottom of the league standings, a full six points adrift of safety following their 3-1 defeat against Southampton on Saturday.

The loss at St Mary’s means the North East club have been defeated in six of their last seven league matches, with their last victory in the division coming against West Brom on February 6.

Despite their seemingly perilous position, Benitez remains hopeful that his side can still avoid the drop, although he concedes that every game is fast becoming a must-win match.

He said: “If other teams lose some games maybe it will be enough with four wins. If they continue to win games then maybe we’ll need five wins. And if you lose it doesn’t matter. So I feel we have to approach every game like a must-win game.”

The Spaniard believes some of his players are feeling the pressure of being involved in a relegation battle, but he insists he is striving to make sure they are all brimming with confidence ahead of their next match against Swansea at St James’ Park on Saturday.

He added: “Some of the players know we can do it, but some of them are worried about these mistakes that we’re making in games.”

Newcastle could be nine points adrift of safety by the time they kick-off against the Swans, as the two teams directly above them in the table, Norwich and Sunderland, will go head-to-head in the early kick-off at Carrow Road on the same day.

The Magpies are available at 1.05 to be relegated come the end of the season, while Sunderland are on offer at 1.22 and Norwich are priced at 2.88.