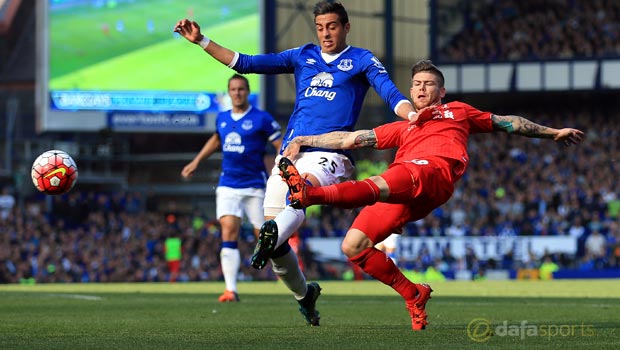 Roberto Martinez has expressed his delight at the flourishing partnership between Ramiro Funes Mori and Phil Jagielka at the heart of his defence.

Funes Mori was signed from River Plate on transfer deadline day for a fee of £9.5m and has quickly settled into life at Goodison Park.

Having spent so much of the summer desperately trying to retain the services of John Stones, injury has since denied Martinez the services of the England international defender.

His absence, along with that of fellow regulars Seamus Coleman and Leighton Baines, has meant Martinez has been forced to field a new look backline.

The Spaniard is impressed with his young back four and he felt Argentine Funes Mori was particularly strong in the Merseyside derby draw with Liverpool.

“Ramiro was very impressive. I never doubted he had the mentality and personality for the Premier League and for the big games.

“You could see he embraced the occasion, he really enjoyed the crowd and I thought he was so in control with every action,” the Everton manager said.

Martinez was delighted to see the 24-year-old looking at home alongside the club captain.

“He defended with real calmness but was strong in the relationship with Phil Jagielka. It is a new partnership and it’s nice to see it growing so quickly,” he added.

In all, three of Everton’s back four against Liverpool went into the game with just 17 minutes of derby experience between them.

With full backs Coleman and Baines absent, Tyias Browning and Brendan Galloway were given the nod against the Reds and Martinez was enthusiastic at the manner in which they took the occasion in their stride.

He told evertontv: “It was an inexperienced back four against a difficult tactical challenge and to see us working as well as we did, it was impressive.”

Everton are 9.00 to finish in the top four this season while they are 3.30 to win their next game at home to Manchester United.